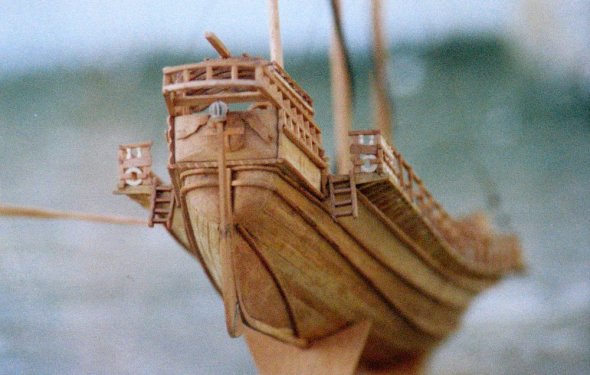 I spread out some newspaper on the porch table and laid out some supplies. The kids wore me out with anticipation in building the kits.

“Is that the paint for the boats? When are we going to paint?”

“Heeeeeeyyyyy, I want that brush. Daaaaaad…Stella is taking MY brush.”

And the fighting begins.

But once I got them all working, it was some good time spent. I don’t know how to describe it best, but building the models led us down a path we often take for granted.

“Real” conversation. My twins were asking me about when I was a child. How wood can float. My oldest was learning about parts of a boat as the Toad kit was detailed enough to get his mind going—he started to tell me what’s under the deck hatch, knowledge probably garnered from something like Deadly Catch, another show that needs the parental controls.

Aside from conversation, the kits went together really well. I was impressed with the younger ones being able to (mostly) assemble and paint the pine-wood sailer “Paddle Wheeler” boat without much guidance from me.

My oldest (a year younger than the recommended age of 10) had no issue with reading and following the instructions for the Toad, although there were parts of the build that required a craft knife that I wasn’t going to let him do. He was excited to glue up separate parts of the boat, but still was a bit impatient and couldn’t understand why we couldn’t just glue the whole thing together at once.

I did help him with the painting part, as he wanted to match the paint scheme from the box, so I showed him how to use some tape for straight lines.

Once everything was dry, we took them for a test run in the tub. Honestly, I think my expectations were kinda low for how they’d operate. Remember those balsa planes you’d wind up? And although they had wheels, they could never take off, and would never fly as long as you thought they would.

Well, I was surprised.

I thought the Paddle Wheeler would just go “Brrrrrrrrrrrruuppppppp” and be done.

They both did really, really well. To the point the tub was too small a proving ground. The Toad just kept going and going. It left us wanting to go find a pond.

Everyone says it’s about “experiences.”

I say it to my advertising clients. I hear other parents talk about it.

It’s what my dad did with me a lot. We did stuff. I remember it all.

Except, I don’t really remember what ever happened to that big balsa wood PT-109. But I tell myself one day that I’m gonna build another.

And I’ll experience it with my kids.

Disclosure: I received two boat kits to build with my kids. We don’t get paid for reviews. We don’t promise good reviews of stuff here at dadand, and in fact, we don’t even promise a review. Heck I spent like $20 on paints and brushes and stuff. So I PAID to do this review. Anyway, we kind of do what we want to, and think that sometimes you’ll like it. Or like us disliking it. That’s all. I’m on a boat.

Source: dadand.com
Related Posts
Categories
Latest Stories
Build your own bass Guitar kit Details Ever wanted to build your own bass guitar? Now you can with this...
Metal building kits arkansas Alan s Factory Outlet is a leading supplier for Amish built sheds, garages...
Model Home building kits 3-D Home Kit - for aspiring builders & architects or visualizing...
House building kits for kids Overview In this activity, you and your child will build a bat box and...
Build Your own Mini bike kit If you are looking for a fun, hands-on project to work on without the need...