Build your own Tesla coil kit 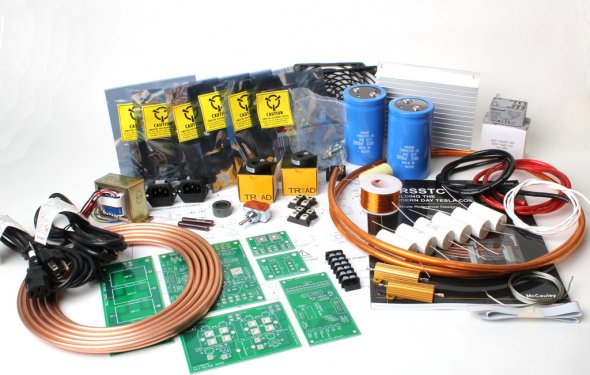 Anyone can build their own Tesla Coil, and now it’s easier than ever thanks to oneTesla co-founders Bayley Wang and Heidi Baumgartner.

“Tesla coils have been our hobby for a while. We developed our first product, the first version of the oneTesla kit, more or less for fun, and put it on Kickstarter a year and a half ago to see what would happen, ” explains Baumgartner. To the pair’s surprise, the kit raised nearly $170, 000 in a week, but they decided to put the brakes on the campaign as they weren’t sure if they could handle more demand.

Since then, they have received feedback on how to improve product, including request for a smaller, simpler kit. “We also thought for a long time about what would make the ideal small Tesla coil, as well as how to improve the mechanical design of our first kit, ” adds Baumgartner. “That’s how tinyTesla and oneTeslaTS were born.”

Currently seeking funding on Kickstarter, the tinyTesla, and oneTeslaTS have already raised more than their predecessor, with more than $258, 000 raised, and exactly one week left in the campaign.

Tesla coils are a type of resonant transformer that produce extremely high voltages when driven by a high-frequency AC. The team at oneTesla generates the AC needed to drive the coil using an insulated-gate bipolar transistor (IGBT) inverter running off of 340 VDC.

“In order to play music, a microcontroller processes MIDI input and converts it to pulses that turn the entire coil on and off at audio frequency. What you are hearing is not the resonant frequency of the coil itself (which is around 300 KHz and therefore inaudible) but rather these “gate pulses” that are produced at audible frequencies, ” explains Wang.

The tinyTesla design fits the coil into the smallest space possible, which also reduces the amount of material needed, helping reduce cost.

“We figured, ‘why not put the primary and secondary coils on the same former, and also put the driver in the base, eliminating the need for a separate chassis?’ Using a clear acrylic tube, the circuit board that the user assembled would be visible, ” explains Wang. “It worked out quite well and resulted in a small Tesla coil that you can hold in your hand.”

The team also wanted to make it easier to connect the Tesla coil. In its current form, users can control the tinyTesla directly over a USB from their computer. However, the most innovative parts of the oneTeslaTS are in the mechanical design.

Source: www.pddnet.com
Related Posts
Categories
Latest Stories
Build your own bass Guitar kit Details Ever wanted to build your own bass guitar? Now you can with this...
Metal building kits arkansas Alan s Factory Outlet is a leading supplier for Amish built sheds, garages...
Model Home building kits 3-D Home Kit - for aspiring builders & architects or visualizing...
House building kits for kids Overview In this activity, you and your child will build a bat box and...
Build Your own Mini bike kit If you are looking for a fun, hands-on project to work on without the need...